What can blockchain do for your business? | Apr19 Newsletter 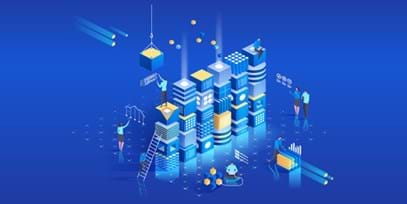 Blockchain has been described as "the most influential technology for the future of business".

At first glance, it's the technology that securely sends, receives, stores and trades digital currencies such as Bitcoin – but its potential reaches far beyond cryptocurrencies. It's somewhat like a big database that's been decentralised – and it's the fact that it's not stored in a single location, combined with the use of algorithmic 'keys', that gives it much of its power, flexibility and security.

Blockchain uses a distributed ledger, so many computers (called nodes) hold copies of, for example, a bank's transactions. When a user wants to transfer some money, every node uses an algorithm to compare the 'public key' associated with the user to the 'private key' included in the transfer instructions. If a majority of nodes okay the transaction (or block), then it's deemed authentic and the money transfer goes ahead (and is added to the chain of transactions).

Blockchain is commonly used by technological startups and global businesses, led from the USA, Europe and Asia, and it's spreading in Australia and the Middle East.

Blockchain, at its core, can be used to record any kind of transaction or information, particularly anything of value, including money, titles, contracts, deeds, music, art or intellectual property.

For example, software could be developed using blockchain technology for use in the music industry (to manage royalties and licensing agreements); to create payment systems for individual businesses that operate without banks; to manage intellectual property that prevents digital piracy; and to manage transactions within the internet of things.

But as with all new technologies, blockchain has its pros and cons.

On the plus side, blockchain is largely recognised to be highly secure and near-impossible to hack. This is in part due to cutting out the middle man, meaning that some see a future without banks, for example, needing to be involved in financial transactions, and also due to the security of its keys.

The downsides include the fact that scams exist even in the world of blockchain, and perhaps more so because of the technology's anonymity. This means that theft is still a possibility as well as 'ransom', where your device is frozen until you pay a cryptocurrency ransom. This typically occurs when bad actors gain access to a set of keys, in which case they can lock the owner out of their account and do what they will with its contents (be they funds, contracts or simply valuable data).

It is still a relatively new and complex technology, so current users are in the class of 'early adopters' and it feels difficult for everyday users to get involved. One expert says it's like the internet was back in the early '90s: not yet understood but with great potential.

Does blockchain have a place in your business?

Introducing blockchain into your business doesn't have to be an all-or-nothing endeavour. It can be integrated with current business technology – for example, real estate businesses could utilise it to simply check the titles on properties, rather than aiming for it to take over several parts of the business process.

The key is to follow the same processes you would with any other business change: research how blockchain might enhance your business, increase efficiency or create new opportunities for innovation and scaling. The technology is in its infancy, which means not all bets will pay off, but the potential upsides make the 'early mover' advantage well worth pursuing.